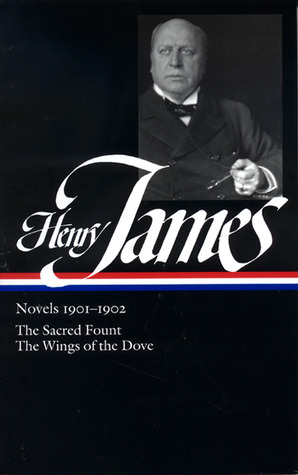 This volume brings together The Sacred Fount (1901), one of Henry James's most unusual experiments, and The Wings of the Dove (1902), one of his most beloved masterpieces and the novel that inaugurated the majestic and intricate "late phase" of his literary career.

Writing to his friend William Dean Howells, James characterized The Sacred Fount, the only one of his novels to be told in the first person, as "a fine flight into the high fantastic." While traveling to the country house of Newmarch for a weekend party, the nameless narrator becomes obsessed with the idea that a person may become younger or cleverer by tapping the "sacred fount" of another person. Convinced that Grace Brissenden has become younger by drawing upon her husband, Guy, the narrator seeks to discover the source of the newfound wit of Gilbert Long, previously "a fine piece of human furniture." His perplexing and ambiguous quest, and the varying reactions it provokes from the other guests, calls into question the imaginative inquiry central to James's art of the novel.

James described the essential idea of The Wings of the Dove as "a young person conscious of a great capacity for life, but early stricken and doomed, condemned to die under short respite, while also enamoured of the world." The heroine, a wealthy young American heiress, Milly Theale (inspired by James's beloved cousin Minny Temple), is slowly drawn into a trap set for her by the English adventuress Kate Croy and her lover, the journalist Morton Densher. The unexpected outcome of their mercenary scheme provides the resolution to a tragic story of love and betrayal, innocence and experience that has long been acknowledged as one of James's supreme achievements as a novelist. This volume prints the New York Edition text of The Wings of the Dove, and includes the illuminating preface James wrote for that edition.
AUTHORBIO: Leo Bersani, editor, is professor emeritus of French at the University of California, Berkeley. His works include Marcel Proust: The Fictions of Life and of Art; A Future for Astyanax: Character and Desire in Literature; The Culture of Redemption; and Homos.
BACKCOVER: HENRY JAMES: NOVELS 1901-1902

This fifth volume in the Library of America edition of the complete novels of Henry James brings together one of his most unusual works with one of his most beloved masterpieces. James characterized The Sacred Fount, the only one of his novels to be told in the first person, as "a fine flight into the high fantastic." Its nameless narrator becomes obsessed with the idea that a person may tap into the "sacred fount" of another person, and pursues his insight with a perplexing and ambiguous persistence. A tragic tale of innocence and experience that has long been acclaimed as one of James's supreme achievements as a novelist, The Wings of the Dove depicts the entanglement of the fatally ill Milly Theale, a wealthy young American heiress, with the English adventuress Kate Croy and her lover, the worldly journalist Morton Densher, in an intricate and ultimately devastating scheme of love and betrayal.