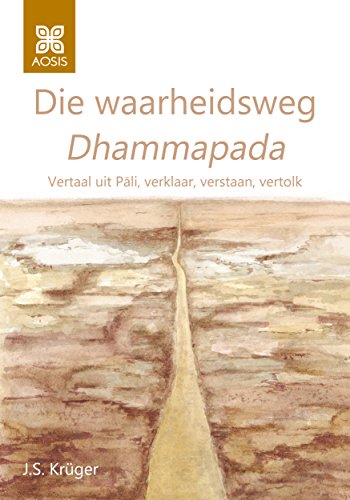 This book aims to contribute to the understanding of Early Buddhism, specifically the Dhammapada (one of the great classical religious scriptures of the world) in its historical setting, namely India in the third to fifth centuries BCE, comprising a unique linguistic, religious and socio-cultural setting. It further aims to contribute to the hermeneutics of bridging the historical gap of two and a half millennia between ancient India and contemporary society and to bridge the gaps between various cultures (African, Western, Indian) and religions, mainly theistic religions (specifically Christianity) and Buddhism in contemporary society. The central foci of this interest are the crucial issues of the existence of God and life after death. The book further investigates the possibility of a metaphysical mystical model, embarked on by myself over some decades. Lastly, it explores the field of a translation strategy from classical metaphysical and religious texts, in this case into Afrikaans, which is a relatively new medium in this field, with unique challenges. Regarding research methodology, the book utilised the historical critical method of explaining the content of the Dhammapada, taking into account its context. It further used the method (derived from phenomenology) of understanding the subjective intentionality structure of the original author(s), going back to the Buddha as well as the method of tendentional interpretation, extrapolating the intentionality structure to a metaphysical-mystical model of religious ‘peace’. It entails a first-hand study of the text in the original language, as well as of extensive secondary literature on the aspects noted above. The book contributes to scholarship by unfolding the history and language of this Buddhist text, revealing the structure of its conceptual edifice, the specific style of its communication of its message and the ultimate goal of this system. It makes a case for the relevance of this ancient system of thought across various divides. It also makes a case for the relevance of an inclusive metaphysical mystical theory of all human systems of ultimate meaning and confirms work done in this regard by the author while offering a translation of the text, regarded as excellent by peers. The target audience of the book is envisaged as three concentric circles. The centre target consists of scholars in one or more of the fields of Pāli and Buddhist studies, theology, comparative religious studies and philosophy. Secondly, the text is aimed at readers with a wide education and cultural interest but not necessarily trained in any of the fields mentioned above. Thirdly, and more peripherally, the book intends being of value to the general public where inter-religious understanding and dialogue is of great significance on a global scale and of particular relevance to South African society.