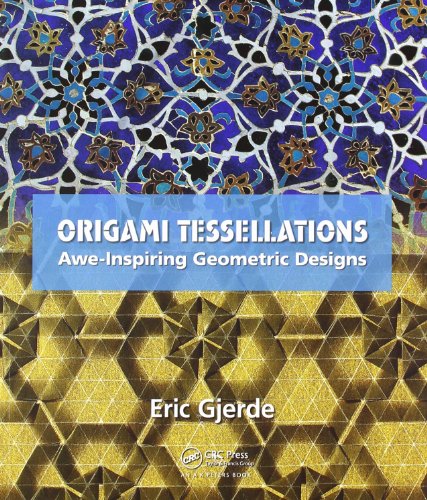 Will be dispatched from the UK. Used books may not include companion materials, may have some shelf wear, may contain highlighting/notes, may not include CDs or access codes. 100% money back guarantee.


… It is surprising and challenging to see which variety of ornaments can be generated this way out of one single sheet of paper. The procedures are explained step by step and allow to reproduce these interesting planar ornaments. … The surprising and wonderful results are worth the effort. I really enjoyed this exercise … [the book] can be recommended to whoever is interested in the field of planar ornaments and its connection to origami.
―O. Roschel, International Mathematical News (IMN), December 2010

In this gorgeous book, Eric Gjerde has presented clear, easy-to-follow instructions that introduce the reader to the incredible beauty and diversity of origami tessellations.
―Robert J. Lang, June 2008

Here [Gjerde] demonstrates 25 of his favorite designs that use tessellations, geometric patterns that can repeat forever, to make paper surfaces of intricate pleats and folds. For most learners, he says, there is a moment of epiphany after which it all makes sense and they can never go back. Beginning and experienced origamists are welcome.
―Reference & Research Book News, May 2009

If Eric Gjerde’s new book Origami Tessellations: Awe-Inspiring Geometric Designs needed an alternative title, it might be: Origami: It’s not just for kids any more! Of course origami has never been just for kids, but this book should convince you that you can create some great art using origami techniques. . . . The projects are graded as beginner, intermediate and advanced, but 'beginner' should be interpreted as someone who has previous experience with origami or a strong interest in learning about it, because even the simplest projects include a lot of steps and demand precise folding. But for someone who enjoys doing origami and wants to try some complex projects, the directions are very clear and the photographs of the finished work should serve as an inspiration.
―Sarah Boslaugh, MAA Online, June 2009

Gjerde’s [book] is as much an art book and is a feast for the eyes on every page . . . It is not standard origami, nor indeed standard tessellation. It takes tessellations into three dimensions and then back into two . . . All pieces are from a single piece of paper, prefolded into the grids. You would not think so when, for example, you have a result that looks like woven strips of tape or a triangular weaving reminiscent of M.C. Escher.
―John Sharp, The London Mathematical Society Newsletter , May 2009

This richly illustrated and easy-to-read handbook is an excellent resource for origami hobbyists. Images from the text could also be used to support classroom discussions of symmetry, tessellation, and multicultural mathematics. ... This book is a valuable resource for origami enthusiasts and anyone with an interest in tessellation-based art.
―Heidi Burgiel, Mathematics Teacher, October 2009


When asked by his parents what he wanted to be when he grew up, five-year-old Eric Gjerde replied, "a paperologist." Throughout his childhood and adolescence he enjoyed paper crafts and origami. After preparing for a technology career, Eric kept looking for an artistic outlet to balance his creative side with his professional life. He returned to his childhood love of paper and discovered a deeper appreciation for the beauty of origami by exploring and researching new areas of folding--including the geometric art of origami tessellations. He currently balances dual careers as a technology professional and as an artist in Minneapolis.