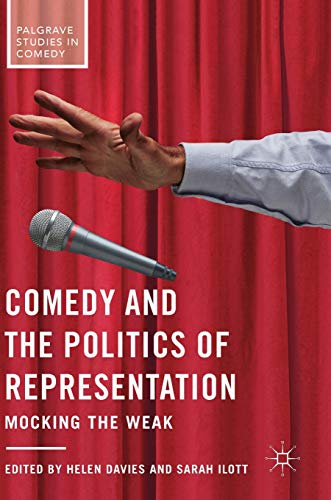 Críticas “What can comedy really tell us about the politics of representation? In this brilliant collection of essays which oscillates between On the Buses and This is England ’90 to Obama and Trump, Comedy and the Politics of Representation: Mocking the Weak panoramically explores representations of identity in comedy and shines new light on the ways in which questions of representation often uncover serious issues of both agency and oppression. An incisive and necessary book.” (Kirsty Fairclough, University of Salford, UK)“This collection of essays covers a broad range of topics while also turning around a key critical concern with the politics of identity and representation.  It is a valuable contribution to the growing scholarship on humour and comedy, raising vital questions about the power dynamics and ethical issues involved in various comedic forms and genres.  I heartily recommend it to anyone interested in the role of humour in social relations and its use either to reinforce or resist existing divisions and inequalities.” (Michael Pickering, Loughborough University, UK) “In a century of the Danish cartoons, #JeSuisCharlie, and #MeToo revelations about comedians’ sexual misconduct, it is clear that comedy is a serious business. Helen Davies, Sarah Ilott, and their contributors conduct fine-grained analysis of the ethics of comedy. Do satirists really speak truth to power, or could some be accused of punching down? Should comedy entail escapism and wordplay, or subversion and changing audiences’ mindsets? This book ranges widely through geographies and history to find answers.” (Claire Chambers, University of York, UK) Reseña del editor This edited collection explores the representations of identity in comedy and interrogates the ways in which “humorous” constructions of gender, sexuality, ethnicity, religion, class and disability raise serious issues about privilege, agency and oppression in popular culture. Should there be limits to free speech when humour is aimed at marginalised social groups? What are the limits of free speech when comedy pokes fun at those who hold social power? Can taboo joking be used towards politically progressive ends? Can stereotypes be mocked through their re-invocation? Comedy and the Politics of Representation: Mocking the Weak breaks new theoretical ground by demonstrating how the way people are represented mediates the triadic relationship set up in comedy between teller, audience and butt of the joke. By bringing together a selection of essays from international scholars, this study unpacks and examines the dynamic role that humour plays in making and remaking identity and power relations in culture and society. Ver Descripción del producto